Arjun Suravaram is an upcoming Telugu-language romantic action thriller film of 2019. It is the official remake of the Tamil movie Kanithan released in 2016. T.N. Santosh, who directed the Tamil version, is also directing the Telugu remake. The film stars Nikhil Siddharth and Lavanya Tripathi in lead roles. Rajkumar Akella and Kaviya Venugopal are jointly producing this project. Initially titled “Mudra,” the film title got revised to Arjun Suravaram. After a long delay, Arjun Suravaram is finally hitting big screens on 29 November 2019.

Below article provides you the complete details of the movie.

Arjun is a talented engineering graduate. His family has associated with the media for generations. Despite being a graduate in engineering, Arjun prefers to follow his passion of becoming a journalist. He joins a TV channel and wants to join the famous BBC. One day Arjun comes across a beautiful girl and falls in love with her at first sight.

When everything is going well, he gets arrested by the police on allegations of cheating the banks using fake certificates and documents. He got charged with cheating banks for several crores of rupees. With the help of his colleague and friends, he gets out on bail. Then he realizes that he was used as a pawn for the scam. On the advice of the police officer, Arjun decides to expose the mega racket of fake certificates all by himself and thus prove his innocence. Will Arjun be successful in taking down the crime syndicate behind the fake certificates scam and what are challenges faced by him forms the rest of the plot.

The first teaser of the Arjun Suravaram released on 4 March 2019. The fans are appreciating the actor for his selection of different types of movies. The movie was scheduled to release sometime in May 2019.

After postponing the release multiple times, the makers announced that the movie would release in November 2019. The trailer also released on 19 November 2019, confirming the release date. Arjun Suravaram trailer has managed to get back the interest of the movie lovers after a series of release postponements. It has gained over 3 million views on YouTube to date. 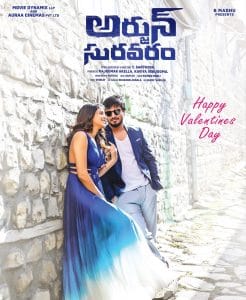 After completion of the film’s shoot, the release date was announced as 28 December 2018. Due to the competition from other movies, the film release got postponed to 1 May 2019. Again the movie release was halted. During the second half of 2019, the makers announced the Arjun Suravaram release would happen in November 2019. Finally, the long-awaited movie Arjun Suravaram is going to release in theatres on 29 November 2019.