Sarileru Neekevvaru is one of the highly anticipated movies of 2020. Anil Ravipudi directorial is making headlines ever since its announcement. Superstar Mahesh Babu and Rashmika Mandanna, who are pairing up for the first time, will be seen in lead roles. Lady Amitabh Vijayashanthi is also part of the film, who is making a comeback into films after 13 years. The movie has an assembled cast & crew and has completed its shoot already with post-production works in full swing. The team has been promoting the film widely with the posters and teasers everywhere. The team has been releasing a song every Monday of December month. Today the last song of the movie “Daang Daang,” a special party number, has been released and is taking the internet by storm. 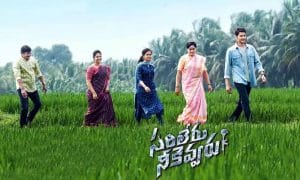 Sarileru Neekevvaru is creating a huge buzz among fans and trade circles. With the release of the teaser, the expectations have reached sky-high as Mahesh Babu will be portraying as an Army Major & in a mass avatar too. The makers have very well used December month for the release of songs on every Monday. Devi Sri Prasad (DSP) composed songs have become massive hits now and have been topping music charts this month.

The first of the movie “Mind Block” got released on 2 December 2019. Blaaze and Ranina Reddy sang this peppy song with a voice-over of Mahesh Babu in between and started Sarileru Neekevvaru’s musical campaign on a strong note becoming the fastest lyrical song to reach 8 million views on YouTube.

The second song, “Suryudivo Chandrudivo,” released a week later. This song is a family number with soothing music and sung by B Praak, making his south debut. The lyrical song has been very well received, and Mahesh-Vijayashanthi’s chemistry is to watch out for in the song.

He Is So Cute

“He Is So Cute” song is a romantic number is sung by Madhu Priya of “Vachinde” fame. Rashmika has danced well in the song shot in the exotic locations of Kerala. The song has become the most popular one from the movie, with many addicted to it, especially children. The lyrical song has crossed 21 million views on YouTube to date.

The theme anthem of the movie dedicated to the Army is written and composed by DSP with an extraordinary orchestra in Europe. A part of the song has already been released on Independence day. The full song released on the fourth Monday of December. The anthem sung by Shankar Mahadevan has been receiving wide applause from fans and film industry for its excellent writing and emotional music. 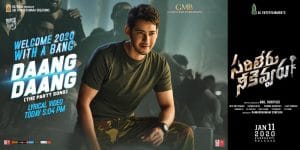 The final song “Daang Daang” got released today at 5.04 PM. Earlier, the makers released the promo of the song through an event on Saturday.

The promo song has been trending on YouTube with over 5 million views. Tamanna will be seen dancing with Mahesh Babu in this special party number. Daang Daang song has become an instant hit and is sure to be played in every New Year party tomorrow night.

DSP has succeeded in giving a variety of songs in the album, and fans are in full josh to see the visuals on the big screen this Sankranthi.

The team of Sarileru Neekevvaru has been working day & night to complete the movie and are promoting it aggressively across Telugu states. The makers announced the date of the pre-release event as 5 January 2020 to be held at L.B Stadium, Hyderabad. The chief guest gracing the event is Megastar Chiranjeevi, and fans can’t wait to see Megastar and Superstar sharing the single stage. 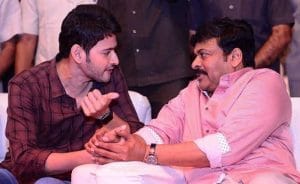 Sarileru Neekevvaru is on the brink of the completion of its post-production works and censor formalities. The movie will release worldwide on 11 January 2020, four days before Sankranthi, and is sure to make this festival much grander.