Ford vs. Ferrari is a Hollywood action drama film of 2019. The film’s basic plot is on the iconic rivalry between the two giants of the automobile industry in the racing history which led to the invention of the new car by Ford Motor Company to beat the racing team of Ferrari at the 1966 24 Hours of Le Mans. James Mangold of The Wolverine fame directs the movie. Written by Jason Keller, Jez Butterworth, and John-Henry Butterworth, the film stars Academy Award winners Christian Bale and Matt Damon in lead roles. Marco Beltrami scores the English music of the film. In the below article, you can get the details of this latest Hollywood flick Ford v Ferrari.

Ford v Ferrari revolves around the racing rivalry of Ford and Ferrari at the 1966 24 Hours of Le Mans. In the 1960s, Ford Motor Company’s observes a dip in the sales of the cars. Ford tries to make a partnership with the reigning champs at the 24 Hours of Le Mans, Ferrari, which is amply rejected after an exciting offer by Fiat. After the humiliation by Ferrari, Ford directs its racing unit to make a car to challenge the Ferrari’s champion race cars. For this task, Ford chooses Carroll Shelby (Matt Damon), retired racer and last American winner at the Le Mans, Shelby later seeks the help of Ken Miles, a British racer and mechanic to design the mega car to defeat Ferrari’s racing cars. Together, they set to develop the race car, Ford GT40, to dethrone the Ferrari at the 24 Hours of Le Mans in France. Whether they will be successful or not, the hardships faced by them to create the race car and eventually beat Ferrari at Le Mans forms the rest of the story. 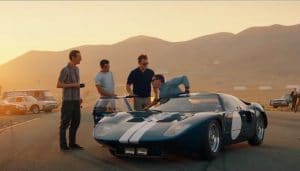 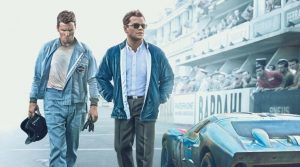 Ford v Ferrari is an excellent story based racing drama movie. The performances of Matt Damon and Christian Bale stand out. Director James Mangold manages to pull off superb writing of Jason Keller, Jez Butterworth, and John-Henry Butterworth with brilliantly executing this 1960’s story. He excels in making it engaging with racing sequences not only for racing enthusiasts but also for inspiring the regular audience with human emotions and endurance. The cinematography, background score, and the supporting cast make the film more riveting. Overall, Ford v Ferrari is a must-watch for racing and action enthusiasts and an inspiration for many. Ford v Ferrari is a strong contender for Best Film at the Oscars.

Ford v Ferrari opened with excellent feedback from the audience. It collected $2.1 million through previews in the US on 14th November 2019. The estimated collection of the weekend is over $52 million worldwide. As of the second weekend, Ford v Ferrari grossed $58 million in USA and Canada and $45.8 million in the global box-office. The total collection after ten days is $103.8 million.