Pandem Kodi 2 movie is a Telugu action-drama Movie written and directed by N. Lingusamy also starring Vishal Krishna. This Movie is a sequel to the successful Vishal’s 2005 Movie Pandem Kodi. Pandem Kodi was a Telegu dubbed version of the 2005 Tamil Super hit SandaKozi. Today (18th October 2018) the Sequel to Pandem Kodi, Pandem Kodi 2 (Telugu Version of SandaKozi 2) is released all across the world. 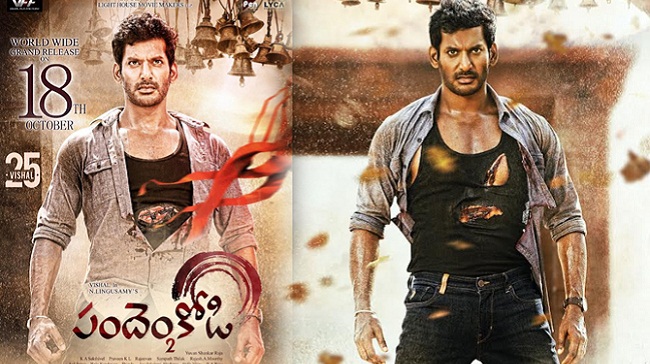 Pandem Kodi 2 movie main story is the Death Risk for a young man during a festival and the Hero is saving the young man and keeping the peace intact during the week-long thiruvizha that the seven villages of the place are conducting after a gap of seven years. Pandem Kodi 2 movie is a Full commercial Masala Movie like its 2005 predecessor Pandem Kodi.

In this movie the hero, other characters compare Balu (Vishal), and his father  Durai Ayya (Rajkiran) to loins and they are also behaving the same way.

Rajkiran is an actor and his screen presence is simply brilliant. Rajkiran’s mature and settled acting brings a lot of intensity to the proceedings. Hero Vishal did look dynamic and performed well in the action episodes.

Pandem Kodi 2 movie romantic track is very entertaining. The Lead Female (Keerthi Suresh) has given a very good performance and kept the movie interesting. Villain role played by Varalaxmi. In spite of her good performance, does not have much role in the movie and does not seem to be a threat.

With a predecessor like Pandem Kodi which was a super hit in 2005 and lot of focus on the making of this commercial movie, the expectation is that Pandem Kodi 2 is going to be a Box Office hit. Let us wait and see, the Audience verdict will come today.