Sarileru Neekevvaru is an upcoming movie starring Mahesh Babu in the lead. Rashmika Mandanna, Vijayshanthi, Prakash Raj are also part of the cast. Anil Ravipudi directs this commercial entertainer. Anil Sunkara of AK Entertainments is producing the film. Sarileru Neekevvaru is creating a massive buzz among trade circles and fans. 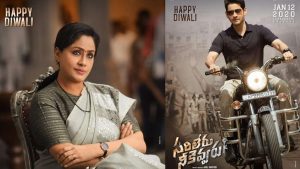 Mahesh Babu is portraying the role of an Army Major for the first time in his career. Director is carefully planning the film to leave no stone unturned to make it a blockbuster hit.

Sarileru Neekevvaru is on the verge of completing its shoot. The fans are asking about the teaser update for the last few weeks. Last week, makers announced that the Teaser is getting ready and will release in the next week. A small GIF video was also released as a glimpse of the Teaser.

We are ready with a 💥
Time to feel #MASSMB 🔥with #SarileruNeekevvaru Teaser! Loading Soon!

Now the makers have started a unique promotional campaign for the movie. Yes, the producers announced that the teaser release date would be unlocked by the fans only today at 6.03 PM.

Fans are going crazy over the announcement ever since the morning. It has become a trending topic worldwide.

Makers released a tweet about the Teaser, and fans have to tweet it back on their pages to unlock the teaser release date.

After creating a huge buzz, the Teaser is releasing on 22nd November 2019 at 5.04 PM. The makers have also promised it to be #MassMB Teaser.The topic became trending India wide in minutes. But the fans have to wait till Friday to get a glimpse of their favorite superstar. The fans can’t wait to see Mahesh Babu in a complete Mass avatar after almost seven years.

Let's set the screens on fire🔥

As Per the latest info, the film is slated to release on 11th January 2019 as a Sankranthi Festival Release.