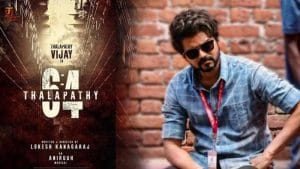 Thalapathy64, tentatively titled, is an upcoming Tamil-language action-thriller film of 2020. Lokesh Kanagaraj is directing the film, which is being produced by Xavier Britto under XB Film Creators, their first venture in film production. The film stars Thalapathy Vijay and Makkal Selvan Vijay Sethupathi in the lead roles. Anirudh Ravichander is helming the music for the film, collaborating with Vijay for the second time after the 2014 blockbuster film Kaththi. Now, the makers have released the much-awaited update about the movie. The official title of the Thalapathy64 got announced on New Year’s Eve with an exclusive poster featuring Vijay.

Thalapathy Vijay, who is on a roll with the blockbuster hit Bigil has already finished much of his shooting formalities for his 64th movie. Director Lokesh Kanagaraj has also reached new heights with two back to back blockbusters, Maanagaram, and the latest sensation Kaithi. Lokesh announced his collaboration with Vijay in August 2019 for a film produced by XB Film Creators. Lokesh revealed the rest of the cast & crew in the next week. The supporting cast includes Malavika Mohanan, Andrea Jeremiah, Shanthanu, Antony Varghese, Nassar, Sriman, Sanjeev, Srinath, VJ Ramya, Dheena, Prem, Azhagam Perumal, Chetan, Soundarya Bala Nandakumar, Gouri Kishan, Brigada, Lintu Rony, Sunil Reddy with Sathyan Sooryan as the cinematographer and Philomin Raj as editor. 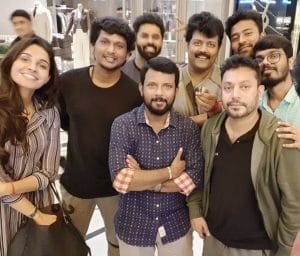 Thalapathy64 film’s shoot started with a formal pooja on 3 October 2019. Antony Varghese, who dropped out citing scheduling conflicts got replaced by Anbu of Kaithi fame Arjun Das. The filming commenced with a schedule in Delhi and later a small schedule in Chennai. The team moved to Shimoga, Karnataka for a long schedule of 45 days. A particular set was erected inside the old prison of Shimoga city. The whole Shimoga city got overwhelmed with the news of movie shoot and royally welcomed Vijay with many waiting outside the hotel daily to get a glimpse of their favorite actor. Vijay Sethupathi and other cast are also part of the schedule, which is presently progressing on a brisk pace.

The team announced a much-awaited update about the first look with the title. The first look release will happen on New Year’s Eve, i.e., on 31 December 2019 at 5 PM.

MASTER it is for Thalapathy64

Ever since the announcement of the update on first look, Thalapathy fans erupted in joy and started trending the topic on social media nationwide. Thalapathy64 Official Title Revealed with the first look at the scheduled time yesterday. 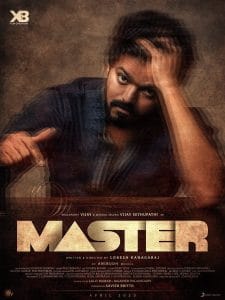 MASTER is the official title of Thalapathy64. Vijay’s look was also shown with him sitting on a table, pointing his finger on a rotating bangle on the table. The poster released is a bit shaken in the poster to hint about the character played by Vijay. According to reports, he will be seen as an alcoholic professor named John Durairaj alias JD. The film release date also got revealed as April 2020. Lokesh continues his style of impressive first look posters, and fans can’t wait to see the magic touch of him with Vijay on big screens this summer.