After so many awesome movies of Akshay Kumar now we can see him in his upcoming movie Laxmmi Bomb which is directed by Raghava Lawrence. Laxmmi Bomb is a remake of Muni 2: Kanchana. The franchise is now taking a turn in Bollywood industry and we can also see Kiara Advani in the opposite role. Bollywood is full of surprises with new remakes of South Movies. The released date is also confirmed and the announcement is made for the movie release in 2020 on Eid. Yes, you heard it right every Eid we hear the news of Salman Khan’s Movie but before we could get any news about Salman Khan’s Movie Akshay Kumar is taking over this Eid.

The First look poster of Laxmmi Bomb and we can see Raghava Lawrence and Akshay Kumar on the right side of the picture. 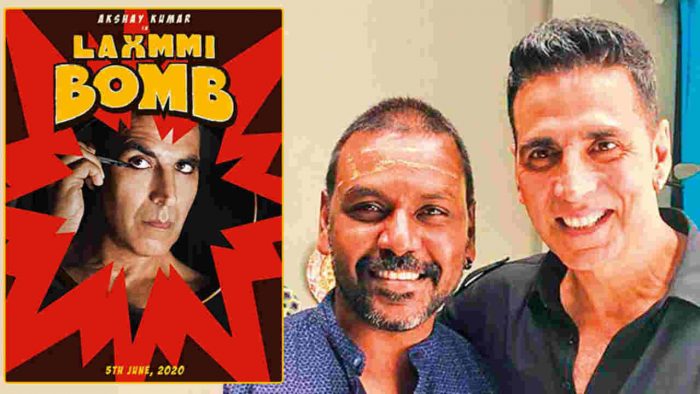 As the Laxmmi Bomb is the remake of Muni 2 (Kanchana) we can guess the story. Which revolves around a cowardly man who is frightened of ghosts. Later, in an event, he is possessed by 3 ghosts and one of them is a transgender woman. This woman wants to take revenge against the ones who destroyed their life using this guy’s body. As we know that Akshay Kumar always looks to give entertaining films to his fans.

Navratri is about bowing to the inner goddess and celebrating your limitless strength. On this auspicious occasion, I am sharing with you my look as Laxmmi. A character I am both excited and nervous about… but then life begins at the end of our comfort zone… isn’t it? #LaxmmiBomb