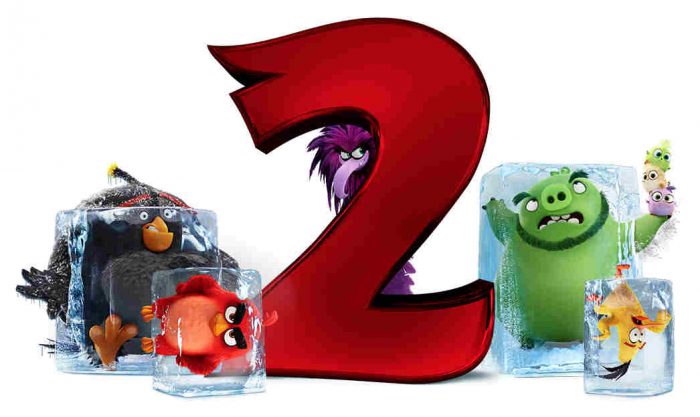 The movie begins with Bird Island’s residents, happily launching themselves off the Slingshot and doing serious stuff. Some are enjoying the beach, Vincent, Zoe and Samantha are building a Sand Castle, then, Red pops out of the sand, he demands Bomb and Chuck to look at their binocles, Chuck looks that a pie is coming out of nowhere, Red then takes Chuck’s binocle and looks at it, they get scared and bend down, but the pie hits Hank’s face, they apologize.

Red looks and sees that it was Leonard with Courtney at Piggy Island and the pigs that were launching pies on them, all the birds get angry. They themselves launch a pepper bottle off the slingshot, which hits a pig that was on a taco restaurant asking for pepper.

The birds are then relaxing at the beach again, but a sun rail starts popping everything inflatable, they see that it was Leonard with a giant magnifying glass, Red, Chuck, Bomb and Terence pile up themselves up in a plank and then jump at the sea, producing a tsunami that smashes Pig City entirely, washing a muddy pig, Oliver that didn’t want to take a bath.

Later, Leonard and his pigs come in piggy zeppelins and open bags full of crabs, which they pack the beach and ruin all the bird’s fun.

Leonard starts looking with his telescope, when he noticed an Ice Ball falling, it falls into the sea and he looks again. Which it is revealed to be a 3rd island that is launching it. Zeta, a purple eagle is tired of all the ice and seals that completely ruin the fun, such as fish, shower, sink, and her dog, she demands another Ice Ball be fired, but Debbie asks Zeta if Glenn is going to be unfrozen.

On the Speed Dating area, Red, Chuck, and Bomb start talking with female birds, such as Dahlia, Willow, and Ella, Silver is talking with Red, but he gets angry as Silver was annoying. So, he goes back to his house, which he eats popcorn and drinks juice, someone knocks on the door, he opens the door and it was Leonard and he gets shocked.

Leonard plans to invade the 3rd island as they may cause trouble to both the islands. So they start recruiting the birds again and create a team and land successfully with the Eagle Island Map.

All the birds get shocked about Eagle Mountain’s destruction, but not Zeta, then, they start marching to the Piggy Submarine, which was thought to be small but later is revealed to be the huge machine full of devices and inventions made by Garry, a smart tech pig.

Meanwhile, the three hatchlings are paddling a raft and get the eggs. But a blue whale appears and lifts them by launching a water jet of the blowhole. Which makes the eggs fall into a cloud. They talk about the plan and say about Zeta, which Mighty Eagle remembers about the days of his relationship with her and the abandon of her on the marriage, Silver asks why he did it, he says that he was a coward and flees away.

Also, If you want to watch The Angry Birds 2, you can check your nearest theatres starting from 23rd August. Whereas, downloading or Watching Movies from illegal websites considered a criminal offense as per the Indian Copyright law. Also, you can be punished with 10 Lakh fine or 3 years of Jail, if you are found supporting or doing piracy.

Thanks to the advancement in technology, there are several legal streaming websites that allow Angry Birds 2 movie download. Also, these services are cheap and you can watch or Download Angry Birds 2 in HD, FHD and listen in Dolby Audio.