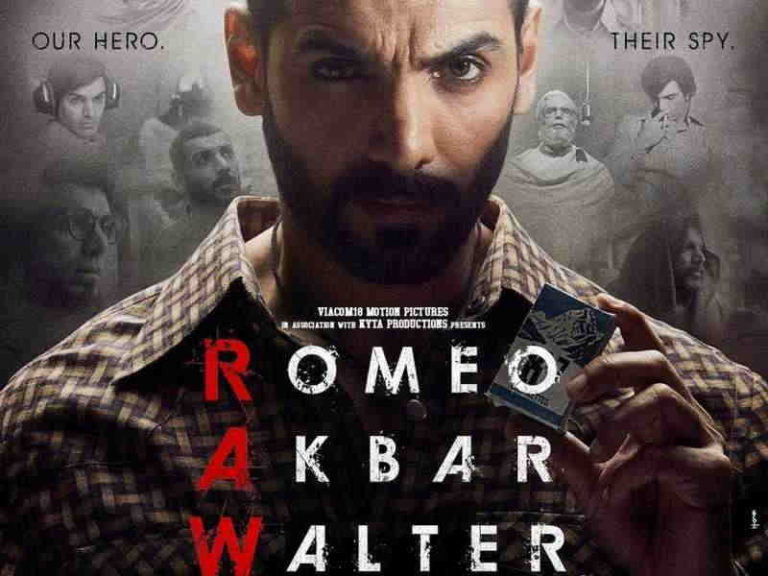 Romeo Akbar Walter features Jhon Abraham (Ravindra Kaushik) as a RAW agent who unfolds confidential information of Pakistan. In fact, Romeo Akbar Walter showcases the shortest war in the world of the Indo-Pakistani war of 1971.

During the time of war, Ravindra Kaushik leaks valuable information to India Army about Pakistan. Hence, Ravindra was posted in a Pakistan Army as a Majora.  Romeo Akbar Walter takes you back to the ’90s showing what happens before the war. Also, how RAW agent Ravindra Kaushik achieve success in revealing the secrets.

In the year 1971 Shrikant Rai (Jackie Shroff), from the RAW appoints Romeo (John Abraham), a banker for spying in Pakistan after he manages to counter a bank robbery planned by RAW officers. After getting hard training in fight and communication he went to Pakistan, leaving behind his mother and he promises to his mother that he will come back soon. When he entered in Pakistan he changes his name as Akbar Malik and his task is supported by Mudassar (Raghubir Yadav),  a Pakistani local who supporting the RAW in Pakistan.

Organized conditions bring him closer to the target Isaq Afridi (Anil George), whose faith on him hardens when Akbar not only convinces him of his dislike towards India but also he saves him from an attack which is directed by the bodyguards of Nawab Afridi ( Shadaab Khan).

Akbar tells RAW regarding a strategic attack on Badlipur that would impact innocent lives both the Nations. Nevertheless, the relation between Akbar and Afridi also increase, due to which he declines to cheat him when Nawab appeals him with an offer. nevertheless, while leaving the meeting, Nawab overlooks an envelope and tell Akber to dispatch the letter to the given room number.

Akbar Was Arrested By Pakistani Office

He is shocked to find his girlfriend Shraddha Sharma (Mouni Roy) in the room. In that room, it disclosed that she is also working for the RAW and she was sent there because Akbar required someone close to be sent for him.

In the Meantime, a Pakistani police officer’s suspicion increases on Akbar, he was arrested by the police officer and they started integrating him, but he is forced to set free due to Akbar being Afridi’s right hand. nevertheless, Akbar’s hidden secret comes out, resulting in a chase between him and police officer’s. Akbar successfully gateway from the cops and he comes at home, in the home Muddasar told Akbar to escape.

Akbar clarifies that there is no way left to get away, which Mudassar agree with him, and goes to make tea for him while waiting, Akbar doubts someone presence in a room. hearing a gun clock, he takes out his gun which given by Muddasar to use at the time of emergency, and he shoots the person with that gun, but he finds it was no one other but Mudassar itself, crying but also memorizing the letters word warning him not to get tangles in relations, he gets away from the room and the next morning pretend as a cop, and he contacts Shrikant for his help

Akbar than meets the cop who earlier grilled him and his senior, disclosing the truth. He chooses to control the attacks on Badlipur himself as a form of revenge on the RAW Escorted by the cop to bypass any sort of cheating, Akbar surprises him by bombing the whole village in a line of the explosion, hence validating his loyalty towards Pakistan.  Due to this war between India and Pakistan started, Akbar now becomes the Pakistani officer known as Walter Khan, after a few years he meets with Shrikant and Awasthi in Nepal. He leaves after exchanging few words and praising Awasthi for his coming promotion.

A Salute to Indian Flag

After that Shrikanth disclose that he is still working for RAW. The bombing did not result in any deaths the people of the village already leave the village as told to them they have to vacate the village due to bad weather. Shrikant also discloses that Walter’s towards work was only the reason that he did not attend her mother’s cremation. At the end Walter saluting the Indian Flag.

Also, you can watch Romeo Akbar Walter, you can check your nearest theatres starting from 5th April. Whereas, downloading or Watching Movies from illegal websites considered a criminal offense as per the Indian Copyright law. Also, you can be punished with 10 Lakh fine or 3 years of Jail, if you are found supporting or doing piracy

Thanks to the advancement in the technology, there are several legal streaming websites that allow Romeo Akbar Walter movie download. Also, these services are cheap and you can watch or Download Romeo Akbar Walter in HD, FHD and listen in Dolby Audio.

Rome Akbar Walter is a one-time watch movie, as it does lack in Narration and is more of costume drama. The Story of Rome Akbar Walter is quite interesting about a Banker who gets selected by RAW to execute a mission. On the other hand, Robbie Grewal does manage to keep the suspense until the end. The best part of the story is the situation of how a Spy gets stuck between Indian and Pakistan to become a double agent.

Whereas, Joh’s acting is the same throughout the movie. To put in a simple world you will see a John doing 3 roles with the same expression will definitely make the character boring. In fact, this was one of those movies in which John could have done a much better job. Sikander Kher’s role does manage to add some value to the movie. Also, Mouni Roy’s character in this movie has nothing to do. In fact, she was there on the screen for just a few minutes.

It does not make sense of how a Banker becomes a RAW agent and get’s trained in a couple of days to start doing a secret investigation. This is a clear picture of how the movie lacks in the narration. In fact, the story of the movie is so well written that a proper narration could have made it a blockbuster movie.

Similar to John’s expression, the Narration of the movie is the same. There are some parts that could have been narrated even better. Parts where John carrying transmitters for the mission and later goes through 3rd Degree torture. All these scene doe not have a proper angle or narration.

Whereas Rome Akbar Walter does have a lot of similarity to Raazi, but Raazi is a much better movie than RAW.

Romeo Akbar Walter could have been a better movie, as it has a good storyline, but lacks in a narration. Also, we believe that the movie could have done better if there was someone who had much better expressions. Whereas, Romeo Akbar Walter is a movie that can be watched just once.