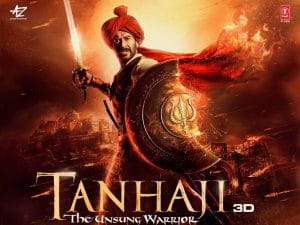 Tanhaji: The Unsung Warrior is an upcoming 2020 Bollywood period war drama film. Tanhaji set in the 17th Century based on the real-life character Tanaji Malusare, who was the military chief under Chatrapati Shivaji Maharaj.

The film stars Ajay Devgan in the title role along with an assembled cast of Saif Ali Khan, Kajol, Sharad Kelkar, Jagapathi Babu, and Pankaj Tripathi. Om Raut directs this period film. It is Ajay Devgan’ s 100th feature film as an actor.

The film scheduled worldwide release is on 10 January 2020. 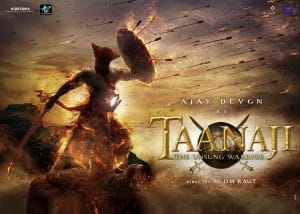 In the 17th Century, The Mughals set Delhi as the capital of Northern India. Similarly to expand their territory to Southern India, Mughal Emperor Aurangzeb declared hill fortress Kondhana as the capital of Southern India. On the other hand, The Maratha Sovereign Chatrapati Shivaji Maharaj wants to capture Fort Kondhana at any cost to avoid the Mughal invasion in Southern India. Shivaji Maharaj commands his military chief Tanhaji Malusare to recapture Kondhana while Aurangzeb sends his dear commander Uday Bhan to defend the Maratha attack on the fortress. Tanhaji, along with his men, attacked the fort at midnight, which eventually leads to the battle between Maratha and Mughal army. The movie reflects on how the Maratha army was able to capture Kondhana from Mughals. The war is known as the Battle of Sinhagad. 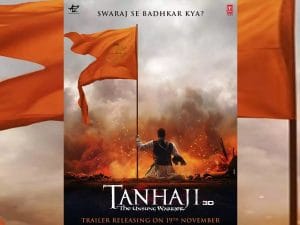 The trailer has crossed the expectations of the audience. Ajay Devgan has gone one step further with exceptional acting and stunts in his 100th movie. Saif Ali Khan is a surprise package in the film. Kajol pairing with Ajay in his 100th film has made the movie much more unique and leaves a mark on the audience. The thumping background music, along with punchy dialogues, is the highlight in the trailer. The trailer gained over 25 million views in a single day and is trending on YouTube. The fans are going gaga over the official trailer and can’t wait to watch it on big screens. 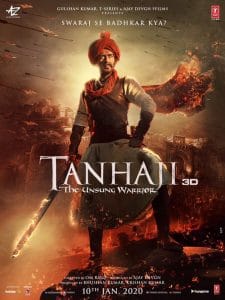 Initially, Tanhaji was scheduled to release on 22 November 2019. Later it got postponed to 27 December 2019 due to shooting problems. The film further got pushed back by two weeks. The movie is slated to hit screens on 10 January 2019. The movie is also releasing on a 3D version making it much more exciting.