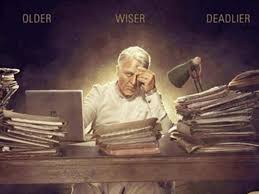 Kamal Haasan making his comeback in the film industry after a long time with the sequel of his Blockbuster film Indian. Indian 2 is a Tamil language Action Thriller film directed by S. Shankar. The makers of Indian 2 movie planning to make a sequel of Indian film in May 2015 and the first discussion held with the Indian movie producer. Kamal Haasan and Nedumudi Veni will play their roles as the same in Indian film. In the below-mentioned article, you will find the details about Indian 2 Full Movie Coverage – Shooting Update, Release News, and Starcast.

The makers of the film offered many Bollywood actors for the Antagonist role including Ajay Devgn, Akshay Kumar, Abhishek Bachchan, John Abraham, and Vidyut Jamwal.

In January 2019 the first promotional poster of Kamal Haasan in his character as Senapathy was release. On 18 January 2019 the first shoot for the film started for a week at Government General Hospital in Chennai and close to the studio. Then the shooting is delayed due to the set is not met with the expectation of S. Shankar. Then again shoot started in May 2019 due to elections again the shoot got delayed and makers decided to start in August 2019.

On 12th August 2019, the shoot begins with supporting actress Rakul Preet Singh. Then another shoot happens with Kamal Haasan and other junior artists which took place in Bhopal and that action costed Rs.40 Cr approx. Later on February 2020, the accidents happen on the set in which Assistant Director and other 2 members died. We can expect that shooting will get the start again once the Government removes the restrictions due to Pandemic COVID-19.