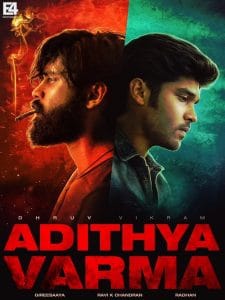 Adithya Varma is an oncoming Tamil romantic drama film of 2019. It is the official remake of Telugu blockbuster Arjun Reddy starring Vijay Devarakonda in the lead. The Tamil version stars Dhruv Vikram, son of Chiyaan Vikram, making his acting debut in Kollywood. Banita Sandhu and Priya Anand play the leading actresses in the film. The movie is directed by Gireesaaya, who is also the co-director of the original version Arjun Reddy. Mukesh Mehta of E4 Entertainment is producing the film. 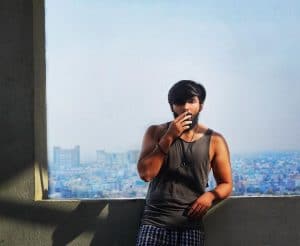 As it is a remake of Arjun Reddy, the movie revolves around the same plot as that of the original. Adithya Varma (Dhruv Vikram) is a high performing surgeon who is always a hot-headed and alcoholic doctor. The film is based on the emotions (love and pain) of Adithya with Meera (Banita Sandhu), whom he met at the time of his medical studies. The movie revolves around Adithya’s fall down after the marriage of Meera and what happens to his professional career due to his alcoholic, fierce behavior forms the story.

Bala initially directed the film with the title Varmaa. The shooting started in March 2018 and completed by September 2018. The producer Mukesh Mehta was unhappy with the final copy and asked Bala to make a lot of changes. These made the director fierce and left the project.

Later in February 2019, E4 Entertainment announced a complete re-shoot of the film with a new cast and crew with Gireesaaya directing the latest version. The movie rolled out during March 2019 with a new title and finished by mid-May.

Below are the complete cast and crew details of Adithya Varma.

The Official Teaser released on 15th June 2019 on YouTube. The teaser received a positive response from the audience than the previous version Varmaa, directed by Bala, which got heavily criticized. The teaser has over 15 million views on YouTube to date. 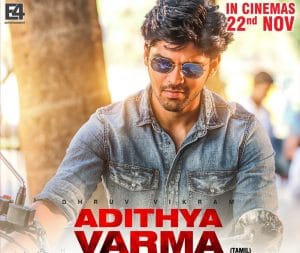 The makers announced the release date as 8th November 2019 initially. Later they postponed it for some censor problems. After too many hardships faced the film, Adithya Varma is finally scheduled to release on 21st November 2019 worldwide and on 22nd November 2019 in India.