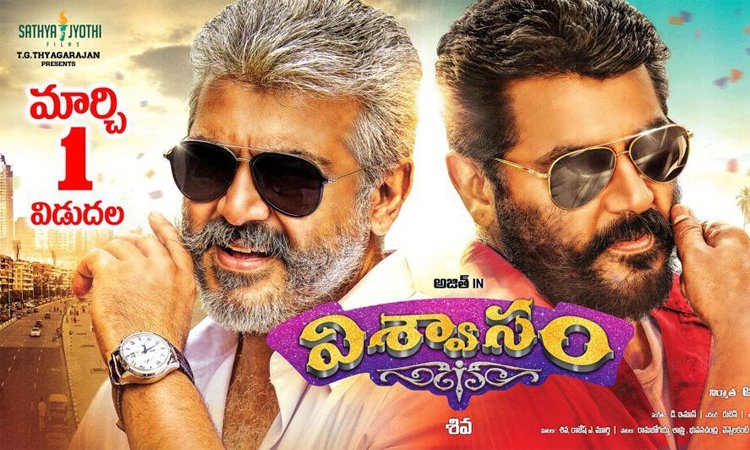 Viswasam movie is out and we have got a lot of positive response from our audience. This is one of the best Family entertainment movies and Ajit gets a good start in 2019. Viswasam is directed by Siva. The movie is produced by T. G. Thiyagarajan. Ajith Kumar and Nayanthara have played the Lead Roles in this movie. Jagapathi Babu, Anikha, Vivek, and Yogi Babu have acted in the supporting roles. The screenplay is done by Siva, while the Music is directed by D. Imman. Viswasam has an amazing story about how a businessman fight with a guy from the village. In fact, the whole movie is a war between the corporate looking to take over the lands of the farmers. Viswasam Telugu Full Movie Download and where to Watch Viswasam Online.

Ajit’s acting in Viswasam is mind blowing and Nayanthara’s charm is clearly seen in the movie. The story is quite expectable, but there are a few twists in the movie that actually make the movie worth watching.

Thooku Durai (Ajith) is a well-respected chieftain of Koduvilaarpatti village in Theni district. Well, after a few years in Ayyanar Temple, a Thiruvizha festival is taking place and Thooku Durai’s opponent Sundar essays to stop it from happening. On the other hand, Thooku Durai’s aunts (Kalairani and Sujatha Sivakumar) want to see his wife and his daughter. Later, when his aunt forces him, he decides to go to Mumbai and meet them.

Merit (Robo Shankar) and Rosamani (Thambi Ramaiah) are upset with Thooku Durai’s and remind him of his situation 10-12 years ago. He was a carefree man and a rice mill owner who uses violence to deal with his problems. Later, when he was chasing a goon he comes across Nirajana (Nayanthara) a doctor who lodges a case against Thooku Durai for his behaviour.

Thooku Durai sees Nirajana, he is beaten by her and then surrenders to the cops. Afterwards, she is forced to release him as Thooku is in jail due to her misunderstanding. On the other hand, Aavudaiyappan (Mime Gopi) warns to close her medical if she doesn’t pay him the protection money. Within a short span, Thooku Durai locates her camp near his rice mill so that no one can threaten her. Thereon, Niranjana realizes her love for him and she proposes to him which is happily accepted. Now, they get married happily but here Niranjana was not happy because of Thooku Durai’s involvement into fights. Later, Niranjana gets pregnant and she is blessed with a baby girl, whereas she decides to leave  Thooku Durai and starts to live with her daughter.

Subsequently, when Thooku Durai tries to meet Niranajana at Niranjana Pharmaceuticals, he sees that his daughter Swetha (Anikha) who is in a competition for Junior National 100m title. In this process, Gautham Veer (Jagapathi Bapu) tries to kill Swetha because in this race his daughter participated and she loses the competition by milliseconds. Before the race, Gautham threatens her daughter not to lose this race. But after the results, his daughter tries to attempt suicide and in this process, she becomes paralyzed and Gautham vows to kill Swetha.

After knowing this, Thooku Durai requests to Niranjana to appoint him as a bodyguard of Swetha. Niranjana agrees to it and Thooku Durai doesn’t reveal Swetha that he is her father. However, he is enjoying with his daughter and even he saved her from goons in multiple occasions.  Later, Thooku Durai and Gautham meet face-to-face and their fight begins. At the same time, another competition takes place and Swetha again wins the title. On the other hand, Thooku Durai defeats Gautham and tells him don’t pressure children they grow as they want. Eventually, Swetha is announced as the winner along with Thooku Durai name and all three reunites happily.

Viswasam has successfully run in theatres and it has received a positive response from the audience. However, Visawasam will be available on TV within a few months of its release between June or July. But if still Viswasam running in your cities please watch this film in theatres for a better experience.

On the other hand, Visawasam will first air on legal streaming websites which are cheaper in cost. In fact, downloading or watching film from illegal websites is a crime. So watch films from legal websites to fight against piracy.

Where To Watch Viswasam Full Movie?

Movie rater doesn’t support piracy and even we encourage everyone to watch or download movies from legal websites.  According to copyright law, watching Viswasam from illegal from sites is against the law. So, we request you to not engage in these activities and watch movies legally.

Also, other legal streaming websites given below, do not have Viswasam Full Movie Download available.

Satya Jyothi Films is the production house of Viswasam. In fact, none of them has authorized to share or distribute Viswasam Full movie Download. Downloading or watching movies from illegal websites is a crime.

However, we strongly request not to download or watch Viswasam from these illegal websites. Furthermore, if you help us fight against piracy then it will be helpful for the filmmakers and other supporting workers working in the Tollywood Film Industry in and around AP & Telangana.

Also, check this list of illegal websites which government has banned because they are trying to provide Viswasam Full Movie Download Illegally.

In Viswasam, Ajith and Siva have collaborated for the fourth time. This time the duo has amazed the audience. The film has more similarity with their last film Veeram. This film is set against a village Koduvilaarpatti where Durai (Ajith) is loved by the villagers for his courage and honesty.

Thookku Durai (Ajith) is the favourite of his family and lives freely by his own rules. His life alters when doctor Niranjana (Nayanthara) visits his village for a medical camp. Later, the love story begins and they get happily married. But their relationship takes ups and downs in their life. After a conflict between them, Niranjana moves to Mumbai with her daughter ensures to have a better life for her daughter.

Later, Durai decides to meets his daughter (Anikha) who hasn’t met her for a decade. Upon reaching Mumbai he gets to know that his daughter is in danger. Gautham Veer(Jagapathi Babu) a business tycoon wants her life because he believes that she is the reason her daughter is ill. How Durai will save his daughter?

The screenplay has developed in a good way and there are some emotional scenes which go on flow with the storyline. Nayanthara and Baby Anikha are a crucial part of the film and their performance is outstanding. As we all know Ajith doesn’t need any explanation for acting he always gives the best in any role. The overall film is good and it is a family drama film.