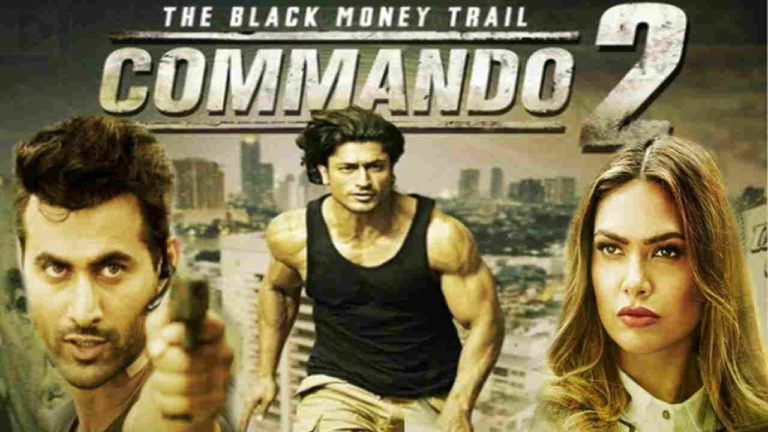 Directed by Deven Bhojani and Produced by Vipul Amrutlal Shah, Commando 2 is an action Bollywood movie released on 3 March 2017. Vidyut Jammwal and Adah Sharma took up the lead roles, whereas Esha Gupta, Vansh Bharadwaj, Freddy Daruwala, and Suhail Nayyar have performed in the supporting roles. Screenplay and Music are done by Ritesh Shah and Mannan Shah and Gourov Roshin respectively. This 2017 Box Office hit is well received by both audience and critics equally. Below in this article, you can find the details about Commando 2 Full Movie Download and where to Watch Commando 2 Online.

Creation of the team to end money laundering to banks abroad

As shown in the sequel, Commando Karanveer Singh Dogra (Vidyut Jammwal) is trained well in hand to hand combat, weaponry and other such skills. Karanveer’s mission is to remove the influence of black money that is transferred to banks in foreign countries. Home Minister Leela creates a team head by ACP Bakhtawar. Also, the team also includes Bhavna Reddy an encounter specialist, Zafar Hussain, a hacker; and Captain Karanweer Singh.

The team goes to bring Vicky Chaddha from Malaysia to India

The team goes to Malaysia with a mission to get Vicky Chaddha back to India. They meet Vicky’s wife, Maria (Esha Gupta), who tells them a story to justify their innocence.

Vicky once declined a negative job ordered to him, as a result, he loses her daughter and his leg. She pleases Karan to take them to Bangkok and not India. The reason was that there they would get the money he wanted to take to India and she and her husband would be saved from the racket they were being forced to be taken into, and thus, innocent.

Maria reveals her true identity and plots a plan

Karan agrees to the terms but once they reach Bangkok, Maria ditches him. Maria reveals that she was the real Vicky Chaddha and she killed her husband. She is joined by KP (Thakur Anoop Singh). She is able to escape from Karan’s custody. It is then shown that ACP Bhaktawar Khan also joins her when he is being lured by money. Maria tells Karan a secret about Vicky which leaves him shocked.

With the help of Bhavna and Zakir, he wanted to catch Maria as soon as possible and take the black money back to India, but Zakir gets killed between all of this. Karan and Bhavna then work together and decide to give it their best shot and catch Maria. During their investigations, they find a person named Jimmy (Siddharth Kher). He was asked by Maria to hack a few accounts, which were of dead people. They thought that there must be some purpose behind it.

They also figure out that Maria hires a person to bring her the briefcase which was kept safely in a bank locker and contained the access to high-security codes to transfer the black money to the various accounts. Karan uses this information to make a plan to catch Maria amidst all the drama. Karan is able to kill Maria’s team but he decides not to stop the transfer and instead replaces the bank accounts, which will be able to help the poor.

Bhavna kills Vicky, or Maria when she figures out that the police won’t be able to arrest her. Karan receives a phone call informing him that there was another mystery to be solved.

That is the reason why we request everyone to Download Commando 2 Full Movie from legal streaming platforms.

There are several platforms to watch Commando 2 Full movie online. But, we request everyone to choose the legal streaming websites.

Also, below mentioned legal streamings do not have Commando 2 Full movie, but might soon be available.

Apart from Zee5, you can also watch Commando 2 Full movie for free after a couple of months.