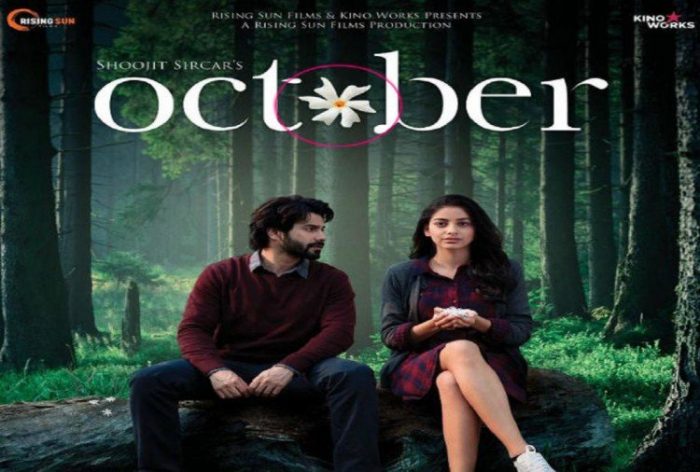 A Bollywood romantic drama film October directed by Shoojit Sircar. The film displays Dan (Varun Dhawan), a student of hotel management is an intern at a top hotel in Delhi along with his batch mates. Below this article, you will find details about October full Movie Download.

Afterward, an incident occurs at the hotel where one of his colleagues Shiuli (Banita Sandhu), lands up at the hospital. Later, this incident affects Dan far deeper than he ever imagined. And, from there he embarks on an emotional journey where he seeks answers and love in the strangest of circumstances. The film features Varun Dhawan, Banita Sandhu, and Geetanjali Rao in the lead roles.

Danish Walia aka Dan (played by Varun Dhawan) is a hotel management trainee doing his internship in a hotel in Delhi. He is a very careless guy who does not like his job due to which nobody likes him. On the contrary, Shiuli (played by Banita Sandhu) is completely opposite to  Dan’s nature. While partying with her co-workers on the eve of New Year, Shiuli falls off the terrace of the hotel.

Shiuli goes into a comatose state. When Dan finds out about the accident, he begins to visit her regularly. Dan develops a sort of emotional relationship with her when he gets to know that her last words before the accident were—Where is Dan? His regular visits to hospital cost him his job and his career begins to go downhill. Concerned about his son, Dan’s mother pays a visit to the hospital to see Shiuli who is now recovering. After this, Shiuli’s mother requests to leave Shiuli as it is and focus on his career.

Time passes by. Dan is now a manager at a hotel in Kullu. However, he still thinks of Shiuli. Unable to take his mind off her, he eventually returns to her. Shiuli is now recovering. She is discharged from the hospital. Dan now starts taking care of her at her home unconditionally. One day he asks her why was she asking about him before the accident. Shiuli only manages to tell his name in reply. They both spend some good times together.

However, one day the  Shiuli’s health suddenly begins to deteriorate. She has a massive seizure. Her lungs stop working and she dies. It leaves Dan said. He leaves her home after bidding goodbye to Shiuli’s parents. Times passes by and Dan has now completed course from the same hotel from where he was thrown out. He is now working in the hotel as a chef. As he is now leading a normal life with the memories of Shiuli, life has other plans for him.

One fine day Dan finds out that he has got several miss calls from Shiuli’s mother. Shiuli’s parents are now moving to Trichi. Dan pays a visit to them for the last time. This is when her mom tells him that Shiuli always waited for the month of October to collect her favorite white flowers Shiuli after which she was named. Dan takes a small tree of Shiuli flowers from her, which is a sign of his unconditional love.

TV Channels already broadcasted October several times. Even before TV Channels, October Full Movie Download will be available on some of the below mentioned Legal Streaming websites by the start of July 2018.

However, we strongly request not to download or watch October from these illegal websites. Furthermore, your activity will help thousands of families working in the Bollywood Film Industry in and around North India.

The government has banned following websites which are trying to provide October Full Movie Download Illegally.

We sincerely do not support piracy and watching movies online or downloading it.
However, watching October from illegal from sites is against the Indian Copyright law.

After giving some of the most memorable movies of Hindi cinema, Shooji Sircar is back yet again with October. The strength of the movie is its simplicity and freshness. Shoojit did not it ruin with ostentations. It is due to his direction that the movie keeps the audience glued to their seats.

Avik Mukhopadhyay is helming the cinematography department. Since the strength of the movie is its simplicity, Avik has successfully captured it in every single scene. The movie looks beautiful,  natural, and fresh.

Shantanu Moitra, Abhishek Arora, and Anupam Arora are three music composers of the movie. There are three tracks in October that go well with the storyline. However, they fail to stay with the audience after the movie

Varun Dhawan as Dan looks very good. He has very genuinely played his character with absolute honesty. You get to relate with the character played Varun. He is annoying and yet very innocent at the same time. On the other hand, there is Banita Sandhu who despite very few dialogues looks promising. She gave an above average performance and remains the pillar of the plot of the movie without whom October is incomplete.

October is a heart-touching story with some of the finest performances by the actors. Its story is completely offbeat, which will only attract to those who believe and captivating story telling without too much effort. It is a must-watch though.