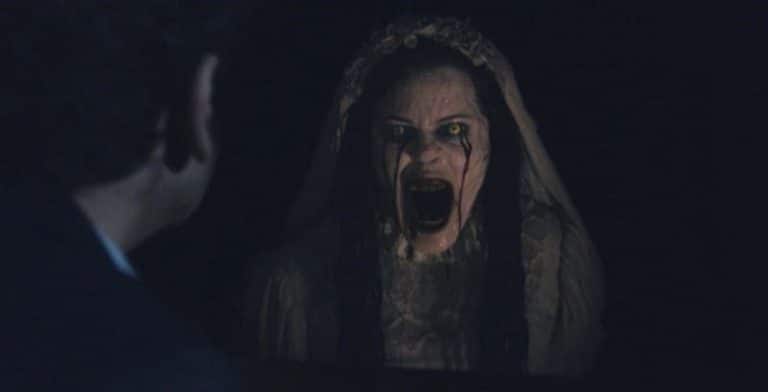 The Curse Of The Weeping Woman is a 2019 Hollywood horror film. directed by Micheal Chaves and produced by James Wan. This is all about a ghost who is trying to make Anna Garcia (Linda Cardellini) children of her own. The Curse Of The Weeping Woman stars  Linda Cardellini, Raymond Cruz, and Patricia Velásquez in the lead roles, whereas Sean Patrick Thomas, Irene Keng, and Tony Amendola have performed in the supporting roles. Screenplay and Music are done by Tobias Laconis and Joseph Bishara. The movie is about Anna Garcia social worker who raised two kids was called for a case one day. Later, as the days pass, she starts noticing paranormal activity, that changes her life forever. Below this article, you will find details about The Curse of Weeping Woman Full Movie Download and where to Watch The Curse of Weeping Woman Online.

The Curse of Weeping Woman Story

The woman who drowned her sons

While spending fun time with the family, the boy playing with his mother gave her the necklace and closes his eyes, After a while when he opens them open finds out that no one is in the field where everyone was playing. Scared, he finds out that his mother was is drowning his brother. He tries to run away from his mother but eventually, she catches him.

After days passed by and it was almost 3 decades since the accident, in 1973 woman name Anna takes a case of finding the two children of client Patrica Alvarez who went missing. T investigate on the case Anna goes to Patrica’s house. During the investigation, she finds boys behind a door. Patrica in the time attacks Anna. Due to the intense fight, the police took her away. The two brothers, Carlos and Tomas tells Anna to stay them behind the doors where they are to remain protected. However, Anna does not listen to their demands and bring the boys to the police.

The boys were been shifted to a Child service center, when walking straight towards a mirror which was exactly ahead of them Tomas sees someone and make Carlos aware of it and both see a woman wearing a white dress. As they were unaware of the creature and were staring right in front of it.

In a grasp of time, the mirror breaks and the woman captures Carlos. Both the boys were been found dead and the cause was that they were drowned in a stream of water. Anna goes to investigate the site where the boys were been found dead, takes both of her children Chris and Sam with her and makes them aware to stay in the car until she comes back. In the meanwhile, she hears Patrica screaming that it was Anna’s fault that she took both the boys away from her and due to this, Patrica has tried some horrifying acts to protect her children’s from the white woman known as La Llorona.

Llorona was now behind Anna’s family

On the other hand, both brother and sister waiting in the car, one of them gets curious and goes outside the car to investigate the scene by himself but La Llorona captures him leaving a burn mark on his hands. As he got scared, he ran back to the car. He does not tell the incident to his mother. On the next day, Sam has been captured by Llorona and it left the same burn marks on her hands as of Chris.

Anna talks to Patricia about who is Llorona and how she is linked with the deaths of her both sons. Patrica reveals that she wanted to take revenge and for that, she prayed Llorona to bring back her sons in exchange for Anna’s sons. When she returns, she finds out that Sam is been drowned in the bathtub by Llorona and tries to save Sam by attacking Llorona. Nevertheless, during this, she leaves burn marks on the hands of Anna. As she was scared of the things happening.

She thinks of getting help from her father Perez. Perez tells Anna that he has gone through this same type of case a long time ago. Perez tells Anna to seek help from Rafael who is a former priest. Anna tells the incident of what happened to Rafael and tried to convince him of saving her family. Rafael on agreeing come to Anna’s house and arranges the instruments required to get rid of the spirit. That whole night Llorona tried to attack, the number of times and tried to drown Anna and Sam in the water stream.

During this, Patrica arrives demanding her sons in exchange for Anna’s. Anna tries to convince Patrica to leave her alone. In the meantime, Chris and Sam run away. Unfortunately, when Anna was been pleading Patrica, she came to her senses and tells Anna to save their sons.

On the other hand, Llorona was repeatedly attacking both the sons. As Anna return she tries to penetrate, the cross-made from a fire tree in Llorona’s chest. Actually, the cross has been made from a special wood that was perceived from the river where Llorona drowned her children’s three decades ago. Therefore, the spirit has been destroyed at last.

On the other hand, if someone caught downloading or watching movies from illegal websites is considered as a crime. Support Movie rater and fight against piracy because it is helpful for the filmmakers and to the whole movie industry.

Where to watch The Cruse of Weeping Woman Online?

There are various ways to watching TheThe Curse of Weeping Woman full movie. But the best way for watching movies is in theatres or from any legal streaming websites. The Curse of a Weeping Woman will be available on TV channels around Sept or Oct 2019.

Within a month of The Curse of Weeping Woman release in theater, Vudu will have this movie available for Rent.

To know more about, The Curse of Weeping Woman release in theater, follow us back or Bookmark this page for regular updates.