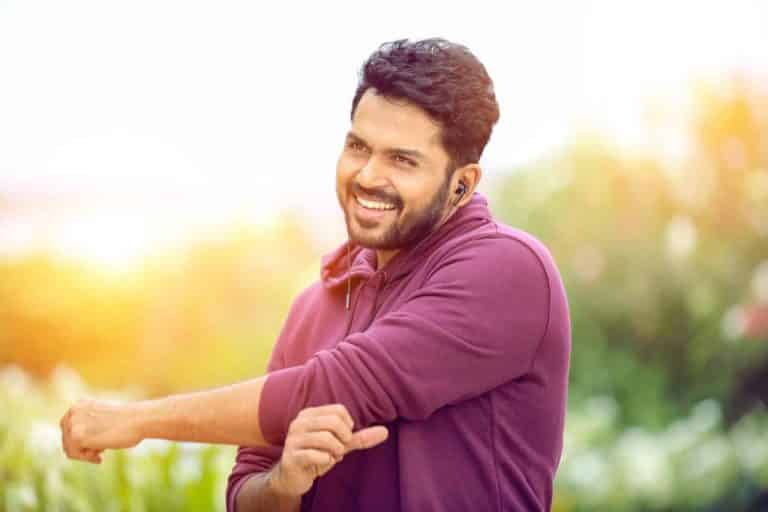 Dev is Indian Tamil language action adventure romantic thriller film based on road adventure written and directed by Rajath Ravishankar. The film was produced by S. Lakshman Kumar. The film stars Karthi and Rakul Preet Singh in the main lead prominent roles while Karthik, Prakash Raj, Vamsi Krishna, and Ramya Krishnan play supportive and pivotal roles in the film. Rajath Ravishankar has provided the Screenplay, while Harris Jayaraj has provided the Music. Dev is a movie about an adventure lover young boy from a well-known family. On the other hand, we have business women who have no time for love. Dev is a 28 years old boy looking for adventure but is he really an adventurer. Below you can find Dev Full movie Download and where to Watch Dev Online.

Dev( Karthi ) is a young man who loves adventure and is always on a lookout for adventurous stuff and is from a very wealthy family. His father is a Business tycoon and since he has lost his mother, his father brings him up very lovingly. Vicky, his friend feels that Dev has no goals set and is not ambitious in life. Whenever Dev goes in for his adventure, he takes his friend’s along with him. Unlike Dev, Vicky wants to have a totally different life and is more interested in an office job rather than fulfilling his passion.

How Dev’s friend tries to distract him

Vicky feels that if he has to avoid going on trips with Dev he needs to distract Dev from adventures. So he tries to make a setting between a businesswoman Meghana and Dev and inspires him to love her. Dev also stops Vicky from being present at the office job interview. Vicky is a stand-up comedian by passion and Dev tells him that he has to chase his talent and pursue it.

How Dev tries to meet Meghana

Dev once sees the Facebook profile of Meghana (Rakul Preet Singh) and sends her a request, but unfortunately, Meghana does not respond to the request and feels let –down. Her life is just the opposite of Dev. He then realizes that she is a woman who has got name and fame in the business world. Dev does not want to stalk her anymore, but his friends pressurize him to stalk her. Meghana who resides in the USA returns to India one day and that is when Dev sees her and he tries to make a place for him in her heart. Meghana suffered a childhood trauma when she and her mother were left alone by her father, and so she hesitates to trust men. Dev’s family and business are located in India.

Dev decides to climb the Mount Everest, but just a few reaching the top an avalanche knocks him down and the reports say that he is dead, but he is covered with snow and he is gasping for breath and all that is heard is Meghana. There are some scenes of rescuing at the top of the Mount Everest towards the end. The ending of the movie is also weak and there is not enough drama or emotional.

The only legal way to watch this movie is through Legal streaming website. Dev will soon appear on and other streaming websites or soon you can watch it on your television screen  You can enjoy watching Dev.

Do not Download or Watch Dev Movie from Illegal Websites

Prince Pictures are the producers of Dev. This company has not allowed anyone to share or distribute Dev Full Movie Download. There are some illegal websites which try to provide Dev full movie download.

On the other hand, downloading or watching movies from these websites are illegal. And, those who do this act will be penalized for it. So, make sure you download or watch movies from legal websites. Stay away from piracy figh against it.

There are many ways to watch Dev Full Movie, but the best way for watching movies is in theatres or chose a legal way to watch this movie. Dev will be available on TV channels around July 2019.

The film has many dialogues. There are many fight scenes but it is only in the context of rescuing the actor and does not go well with the narration of the story which is disappointing.

Though the movie has got star performer like Prakash Raj, they are not given a scope to perform at their best. The movie also failed to leave an impression even in the form of entertainment. It does not have the usual twist and turn of the movies and does not engage the audience. The move as such is predictable. The movie has a public review of 1.75/5.

At the end of 4 days, the movie managed to make a collection of about 2 crores in Chennai. Since the movie has an urban setting, it did maintain a fair note at the end of the first weekend.

The composer of the movie Harris Jayaraj has reused his old ideas, which is again disappointing. Though the visual and scenic beauty impress, it does not provide much of a contribution to the otherwise dull movie

The romance between the two lead characters is weak which does not drag the audience to watch the movie. Karthi plays an urban guy and showcases some trendy styles and has performed well. Not very often do we see woman CEO and Rakul suits that role.

Similar to Dev Full Movie Download in legal streaming sites, you can also Download MP3 songs from mp3 streaming websites. If you have a subscription then this will cost you very cheap.

Dev MP3 songs are available on all MP3 streaming sites like Sawaan and Gaana. Please check below link to Download Dev MP3 songs.

Dev Songs composed by Harris Jayaraj. There is a total of 5 Songs in this movie. Lyrics for Songs written by Thamarai Sea, Madhan Karky, Vivek, D. Imman.