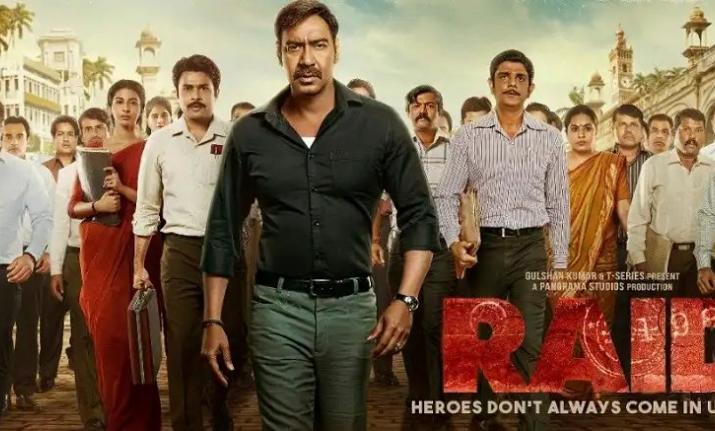 Raid is a Bollywood movie, based on a real-life incident took place during the year 1980. Whereas, the movie is directed by Raj Kumar Gupta and produced by Abhishek Pathak
Kumar Mangat Pathak, Bhushan Kumar, and Krishan Kumar Dua. Also, we have Ajay Devgn, Ileana D’Cruz, and Saurabh Shukla in lead roles. Amit Sial, Devas Dixit, Gayathri Iyer, Sheeba Chaddha, and Saanand Verma. Screenplay and Music are done by Ritesh Shah and Amit Trivedi respectively. Below in this article, you will find Raid Full Movie Download and where to watch Raid Online.

Introduction To Amay And His Team

The movie is based on an IRS income tax officer Amay Patnaik, who is known for his courage and honesty and is recently shifted to Lucknow as Deputy Commissioner of Income Tax. He is living there happily with his wife Malini. One day Rameshwar Singh, who is known to be the don of Sitagarh sends Amay an anonymous tip about black money as a cause of evading income tax for a long gap of time.

Therefore, as a reason Amay and his team after a good planning heads to Sitagarh. There the whole officers’ team faces opposition from Rameshwar’s team and family members but still somehow Amay manages to hold up to hid integrity and ideals. With the power, he looks for every corner of Rameshwar’s house with his whole team to find the hidden black money.

After a few hours of searching without getting any success, he tends to lose hope. But suddenly he gets his hands on an anonymous letter with a map, which reveals the location of the hidden money in the house. Therefore in order to find the black money the team breaks down the walls, staircases, cupboards, ceilings and storerooms and everything possible. Seeing this Mp Rameshwar to save himself from getting caught asks Amay to leave his house immediately.

Adding to the case happened, Amay meets the chief minister of Uttar Pradesh to seek help but gets disappointed as he refuses to help him with the case and informs that the income tax department is under the control of the central government and according to his knowledge raid is legal. Amay meets every possible person including Mp’s, senior officers, politicians to seek for help but returns disappointed.

Then he decides to opt for the last option left that is to meet the prime minister to receive help. Therefore he rallies for political support and also threatens the state cabinet unless the prime minister agreed to meet. Therefore finally on the 3rd consecutive night of the raid, Rameshwar meets with the PM. The PM asks Amay to look for other legal options and thus he agrees to her order. But soon after the PM studies the consequences of helping him she orders Amay and his team to stop the raid and refuses to help him and thus sends Amay away.

Climax Of The Movie

Rameshwar got frustrated due to his prevailing condition and thus he decides to take a major step soon to stop Amay and thus plans on attacking Amay’s wife Malini. But she somehow manages to escape herself from the attack. After Amay gets to hear the news of the attack he got furious but decides to control his anger for the moment. Finally, Rameshwar sends his men to kill Amay including his full team.

A long fight indulges between the team and the henchmen of Rameshwar but nearly defeated Amay gets saved luckily by the police force sent by the PM as one of Rameshwar’s daughter in law informs the police about his plan as a result of taking revenge from him due to her forced marriage. Therefore Rameshwar gets arrested finally and is seem to wonder about the informer’s identity in prison and successful Amay gets transferred to another city with keeping the hope of a more brighter future in his heart.

TV Channels are already broadcasted Raid, that is by around July 2018. Even before TV Channels, Raid Full Movie Download will be available on some of the below mentioned Legal Streaming websites by the start of June 2018.

Movie-Rater is always against piracy, hence we are here to help you with the list of the platforms to watch Raid Full Movie Online. To help you with this, we have verified on all the legal streaming platforms and found that Raid Full movie is not available on paid or monthly subscription platform is given below.

For those who want to watch Raid Full Movie Online for free might be happy to know that this movie is already there on free legal streaming websites. In fact, you will find some illegal platforms too, hence we are here to help to not opt illegal platforms. Let’s see where you can watch Raid full movie online free.

Apart from HotStar, this movie can also be available on other legal streaming platforms given below.