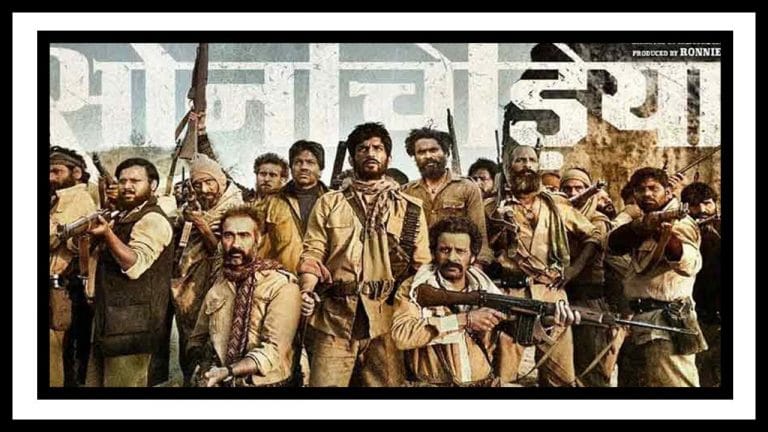 Sonchiriya is a Bollywood action film directed by Abhishek Chaubey. The movie is produced by Ronnie Screwvala. The film will release on 1st March 2019 features Sushant Singh Rajput, Bhumi Pednekar, Manoj Bajpayee, Ranvir Shorey and Ashutosh Rana in the lead roles. Khushiya, Jaspal Sharma, Gagan Dev Rair, Ram Naresh Diwakar, and Mahesh Balraj have acted in the supporting roles. The screenplay is done by Sudip Sharma, while the Music is directed by Vishal Bhardwaj. In fact, this film is base on Dacoits from Madhya Pradesh and a pure fiction film. Below In this article, you can find details about Sonchiriya Full Movie Download and where to Watch Sonchiriya Online.

Dilemma Of Thoughts And Actions

The movie begins with a close up disturbing shot of a rotting corpse of a cobra being consumed by a swarm of flies. A group of bandits approaching the scene. The leader of the group lifts the snake with the barrel of his shotgun and places it aside before whispering a prayer.

They are pretty much led by the idea to free themselves from the burden of guilt of the crime which went wrong. One of the bandits conveys his true feelings when he expresses his sense of shame on the pride of being a bandit.

The dacoits led by Man Singh (Manoj Bajpayee) are being chased down by a policeman Virendra Gujjar (Ashutosh Rana) like a snake which concerns personal vendetta. This story is plotted in 1975, the year in which Prime minister Indira Gandhi declared Emergency in the country.

Besides the leader Man Singh, Vakil Singh (Ranvir Shorey) and Lakhna(Sushant Singh Rajput ) are among vital members of the gang. Man Singh is in search of money to obtain new arms. He and his men arrive Bramhpuri village based on a tip from Lacchu(Jaspal Sharma) where marriage is taking place and the groom is about to get a huge amount of gold and cash. Man Singh reaches the village with his men to loot the wealth. However, the force led by Virendra kills “Man Singh”(Manoj Bajpayee)and half of the members in this loot.

Meanwhile, while running from the police, they met Indumati Tomar (Bhumi Pednekar), along with her sister, “Sonchiriya”(Khusiya) who was brutally raped. Sonchiriya needed to taken to hospital for treatment and desperately asks for Vakil’s help and the gang abided. However, there is more to Indu And Sonchiriya than it meets the eye in general. Indu is running from the husband and in-laws for killing her father in law. The rest of the gang gets crumbled by this truth but Lakhna sticks by her side and defends her saying she did it to protect helpless Sonchiriya. This splits up the gang on principle parameters.

Lakhna with two trustworthy men helps Indu and Sonchiriya escape the place, but the fight has just started. He knew they are chasing them with guns including  Indu’s husband, the cop Virender Gujjar and Vakil Singh and his men. But finally, the boy from Chambal would realize that redemption is much more satisfying than revenge by all means. In the journey to the hospital, Lakhna recites the story to Indumati about a curse of killing innocent children inside a room by fault leading to the killing of dacoit’s group one by one. They needed to find “Sonchiriya” to get rid of the curse.

On the way, they were joined again by Vakil Singh after the ugly encounter earlier. Lakhna and Indumati reach the hospital. In the final scene, Lakhna comes out to surrender since Sonchiriya was saved. But by the curse, Lakhna was killed by Gujjar who was chasing Lakhna. Moreover, Vakil was being killed by the police at the railway station. Later, Gujjar was being killed by a constable who was earlier being insulted by Gujjar.

Also, check out the movies:

Sonchiriya will be broadcast on TV in the month of June or July or even later. But if you want to watch this film you must visit theatres to get the real experience of the film. In fact, everyone wants to watch the film in their mobile phones which makes easier to watch anywhere everywhere.

On the other hand, downloading or watching Sonchiriya from illegal websites is considered as a crime. So, we suggest you watch movies in theatres and do not engage in illegal activities. Hence, stay away from these types of illegal websites.

We really do not support piracy and watching movies online or downloading it.
However, Sonchiriya Full Movie Download from illegal from sites is against the Indian Copyright law. Hence, Movie-Rater encourages you to watch or download Sonchiriya movie from legal streaming websites. ‘

Apart from Zee5, no other legal streaming websites have Sonchiruya Full movie available. But you can check the list below that might stream Sonchiriya Full movie soon.

Check below, the list of Legal streaming websites that will stream Sonchiriya Full movie for free.

Abhishek Chaubey’s Sonchiriya displays a bunch of bandits led by Man Singh (Manoj Bajpayee) as they battle against the cops. Sonchiriya gets into the most important part of India and takes a closer look at those who think they have sinned.

In Sonchiriya, all the characters have done exceptionally well and their performances are worth complimenting. In fact, Ashutosh Rana as Vijendra Gujjar plays the role of a cop who is asked to take care of these bandits. The storyboarding and narration of the movie is up to the mark. Abhishek has managed to put the harsh lifestyle of bandits and shows how they cannot leave this life as that’s the only thing they know.

Indumati appearance in the movie could have been better, as it turns out to be a love story. On the other hand, Sushant Singh Rajput’s character plays a very important role. Also, Sushant is the lead of the movie and he has managed to justify his role against the legendary actors like Manoj Bajpayee.