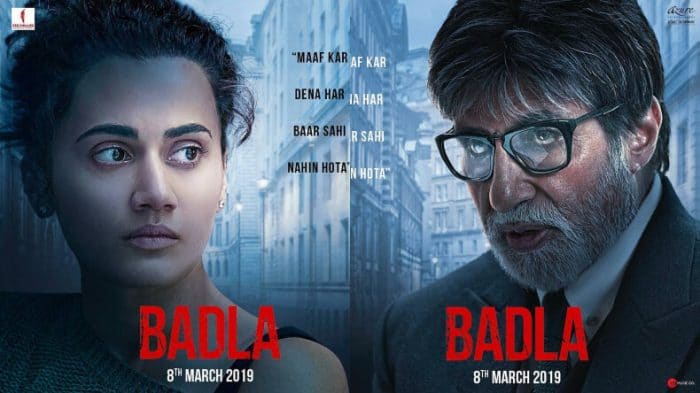 Badla is a Bollywood crime thriller movie directed by Sujoy Ghosh and produced by Gauri Khan, Sunir Khetarpal, Akshai Puri, and Gaurav Verma. The film will on release on 8th March 2019 and features Amitabh Bachchan and Taapsee Pannu in the lead roles. Amrita Singh, Tony Luke, Manav Kaul, Tanveer Ghani, and Denzil Smith have acted in the supporting roles. The screenplay is done by Sujoy Ghosh, while the Music is directed by
Amaal Mallik, Anupam Roy, and Clinton Cerejo. Whereas, on the same day of its release, Badla got leaked on a pirated website like MovieRulz, Tamilrockers and many. Below in this article, you can find details about Badla Full Movie Download and where to Watch Badla Full Movie Online Free HD.

The film starts with the entry of prestigious defense attorney, Badal Gupta(Amitabh Bachchan)on  Naina Shetty’s(Tapsee Pannu) residence to assist her to escape from being wrongfully framed as guilty. Badal starts interrogating Naina about her involvement in the crime, however small. Naina starts citing her story effortlessly to Badal.

Naina explains how she gets arrested after someone blackmailed her on the extramarital affair she had with Arjun (Tony Luke). They were being called on to a hotel room on the outskirts of the town with the money. Naina receives a message from Arjun’s number that he is going to reveal the truth to everyone. Then, she gets attacked and becomes unconscious. She gets up to find Arjun being killed and the money scattered in the ground. Naina claims that she did not commit the murder when the police break in but get arrested anyway.

Badal asks Naina to reveal the complete truth by showing her the newspaper which mentions a missing boy near the hotel after that incident.

Naina starts citing her story again, this time including missing Sunny to her story. As per Naina, all began before three months. She went to Scotland to meet her lover Arjun by lying to her husband. On her way to the airport, she feels guilty about the relationship she had with Arjun and she wanted herself out of this. She lost control of the car and crash its getting involved her in an accident. They found out a boy who was dead after the accident and Naina tries to call the police but Arjun stops her.

Later when Arjun reaches to Naina to pick her up, he shares his meeting with a couple at the scene of the incident. Rani and Nirmal assisted Arjun to fix the car. Later, Arjun found out that the boy who was killed in the accident was their only son. Arjun somehow escapes them through mindfulness but was sure of getting caught afterward. Naina was soon framed with Sunny’s disappearance however Naina’s lawyer Jimmy tackles the situation. In the meantime, Arjun uses her wife’s laptop and steals money from different banks on Sunny’s name. This led to frame Sunny as a looter. This incident led Rani to face Naina in a business party and threatening her desperately. A few months later, they were contacted by the blackmailer and the sequence of events which led to Naina’s arrest followed.

Intellect Of Badal Gupta Pours In

Badal was hired to assist Naina, thus Badal tried a hypothesis to take off Naina out of the case. Badal recreated the incidents which may have happened in the hotel on the day of the incident and framed Rani in a perfect way for the murder. Naina was convinced and revealed that Sunny was alive before she dumped the car in the swamp. This made Badal furious and provides an alternate sequence of events which led to Naina’s arrest. Naina was convinced of Badal’s intellect.

Plot Twist At The End

Badal refuses to help Naina anymore, but Naina begs for his help. Here, she acknowledges Arjun’s murder when Badal decided to leave the case. Badal, somehow satisfied also concludes that there is no witness calling on his phone during this conversation. It was just to hasten up the process. They however shared good vibes and Badal left.

Naina receives a call from Jimmy when she finds that Badal’s pen was interfering with the call. She gets a knocking on the door and finds out real Badal Gupta. Now, she looks out to the opposite side of the apartment to witness the most thrilling moment. It was Nirmal, Rani’s husband who disguised himself as Badal Gupta all this time. Rani calls up the police staring at helpless Naina. Her son’s death is finally avenged.

Badla has released on 8 March 2018 with heavy footfalls in the theatres and even it has received a good response from the audience. If this film is still running in theatres in your city then you may watch this film theatres. Because watching movies online from illegal websites is a crime.

Badla was first leaked by FilmyZilla and has spread like a disease. Filmyzilla, which is another illegal platform for movie download, leaked Badla Full movie just after the release. As Badla Movie Full HD Download Filmyzilla was available, there were thousands of download.

Movie rater does not support piracy and we educate millions of people on a daily basis not to involve in illegal activities. In fact, Movie downloading or watching Badla movies from illegal websites it is a crime. So, beware of these illegal kinds of stuff.

Badla movie story is about a murder with no clue. This is what makes the story to the next level. Naina’s character played by Taapsee Pannu plays a very major role. Amrita Rao’s character which comes on the 2nd half builds up the story.

Amitabh Bachchan has single handily managed to take the film on the next level. His strong voice and charming personality fit in his every character. And, he easily attracts the audience with his roles.

On the other hand, Taapsee Pannu manages to do every character whichever has assigned to her. In this film, she has done a married woman character which she executed extremely well. And, after a long time, we see Amrita Rao on the big screens.

After watching the movie, it becomes clear that ‘Badla’ can be one of the super hit films of 2019. Each and every character is attached to the story and everyone has done a tremendous job. Moreover, the narration, acting, dialogue, background score.