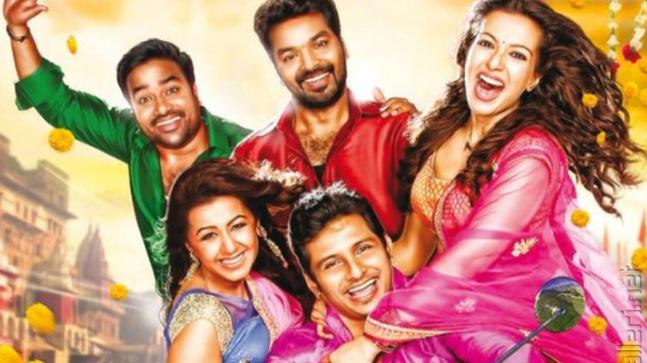 Kalakalappu 2 is a 2018 Tamil Drama and is not a sequel to the 2012 comedy-drama film Kalakalappu.  This movie is directed and written by Sundar C and produced by his wife Khushboo with Avni Cinemax. Kalakalappu 2 features Jiiva, Jai, Shiva, Nikki Galrani and Catherine Tresa in the lead roles. Radharavi, Satish, Yogi Babu, and Ramaprabha have performed in the supporting roles. Also, Music is provided by the Hip-hop Tamihiza, while screenplay has provided by Venkat Raghavan. Which is quite famous in Tamil film industries. In this article, you can find the details about Kalakalappu 2 Full Movie Download and details about where to Watch Kalakalappu 2 Online.

The movie starts with Raghu (Jai), who is trying to threaten and kill his own father. The only reason behind this was not taking noble care of his family. Later, he comes to know that his father owns an inherited property in Kasi. In fact, the property was almost 100 years ago this property was given on lease.

The Twist and the turns:

By the time we enjoy the twist, a raid happened in ex-minister Dharmaraj’s (Madhusudhanan) home. In fact, Dharmaraj seems to hide a laptop to his auditor (Munishkanth) having all his illegal property detail. The auditor runs away with the Laptop and hides in Kasi, where he decides to make some money by blackmailing the minister. And to execute his plan of earning some money he calls up the minister and puts up his demand of Rs. five crores to again hand over the laptop.

Meanwhile, a Raghu travels to Kasi to take charge of his inherited mansion and property. After going there he gets to know that the property is now being managed and taken care by Srinivas alias Seenu (Jiiva). Knowing Raghu’s intentions, Seenu tries to avoid and stall him until he manages to get his sister “Hema” (Catherine) engaged with Gopal (Sathish) as he wants to become a sanyasi once Hema is settled in her life.

You need to do what it takes to earn what you want:

In order to get this situation sorted out Raghu agrees to help Seenu get his sister engaged but he also does not want Seenu to become Sanyasi. For that Raghu and Hema, both try to make Seenu give up on the idea but in the process of convincing Seenu, they fall in love with each other.  On the other hand, Jai too gets attracted and attached to a local tahsildar “Aishwarya” (Nikki Galrani) who is a family friend to Seenu.

The movie later shows that both Raghu and Seenu had been cheated for the mansion by some guy named Ganesh (Shiva) and they go to Karaikudi to catch hold of him to get back their money. And meanwhile, the minister also starts his ride to get back his laptop. In this whole jugglery, the movie shows the fun of all these three characters moving from here to there in order to get the money and the laptop.

The movie is a full to bumpy ride of jokes and comedy with a decent climax. In the climax, Movie turns to a situation where Raghu starts his journey to get back his mansion and in the process the get his property fall in love with Seenu’s sister and develops care towards her brother Seenu who wants to become Sanyasi. In the whole process, Seenu also falls in love with Aishwarya who is nothing but Ragu’s family friend. The movie again takes a turn when both Ragu and Seenu follows Ganesh who has cheated them and to take back their money. The movie takes many turns and twists full of entertainment.

Kalakalappu 2 is an amazing Tamil movie and have received a decent response from the audience. Also, you might be looking for Kalakalappu 2 Full movie download. In fact, movie-rater is here you guide you with legal ways to watch or download Kalakalappu 2 movie online.

Also, it is a known fact that watching or downloading any movie from illegal websites is a crime. Hence, it is our duty to support the Copyright law.

Note: We will keep you updated as soon as Kalakalappu 2 is available on any of the legal streaming platforms. Hence, request to bookmark this page to get regular updates.

Director Sundar C’s is a very fine director of the movie industry when it comes to handling a collective and qualifying every actor’s existence. The movie has showcased the character in their true forms with Sundar Cs direction. He has added his own comedy style in the movie creating the same magic as of 1st part.

The movie has a completely different story this time as compared to its first part with new crew cast featuring Jai, Jiiva, Shiva, Catherine Tresa and Nikki Galrani in the lead roles.  Jai has played his role perfectly with his funky style of dialogue deliveries and fascinating act. All the actors have also made their 100% efforts to flood the viewers with a laugh.

Cinematographer U. K. Senthil Kumar is a very famous person for his fine style of capturing the scenes and intriguing photography. All the shots in the movie have been captured beautifully with real-life effects.

The music in the movie is composed by Hiphop Tamizha. The movie album has 5 tracks and they have been released through singles. The lyrics of the songs are written by Mohan Raja and Hiphop Tamizha making it a beautiful to hear one can lose himself with the music and its lyrics.

You must go for ‘Kalakalappu 2’ if you are a diehard fan of comedy movie as the ensemble cast of this movie takes unlimited turns twists to keep you in engaged. As the forte of Sundar C’s is comedy he never disappoints his viewers in that area. As usual, it is the last half an hour of the movie that turns out to be nearly a non-stop laughathon and the first half takes some time to make up and present the huge star cast, their drama and the vibrant frames of the story.