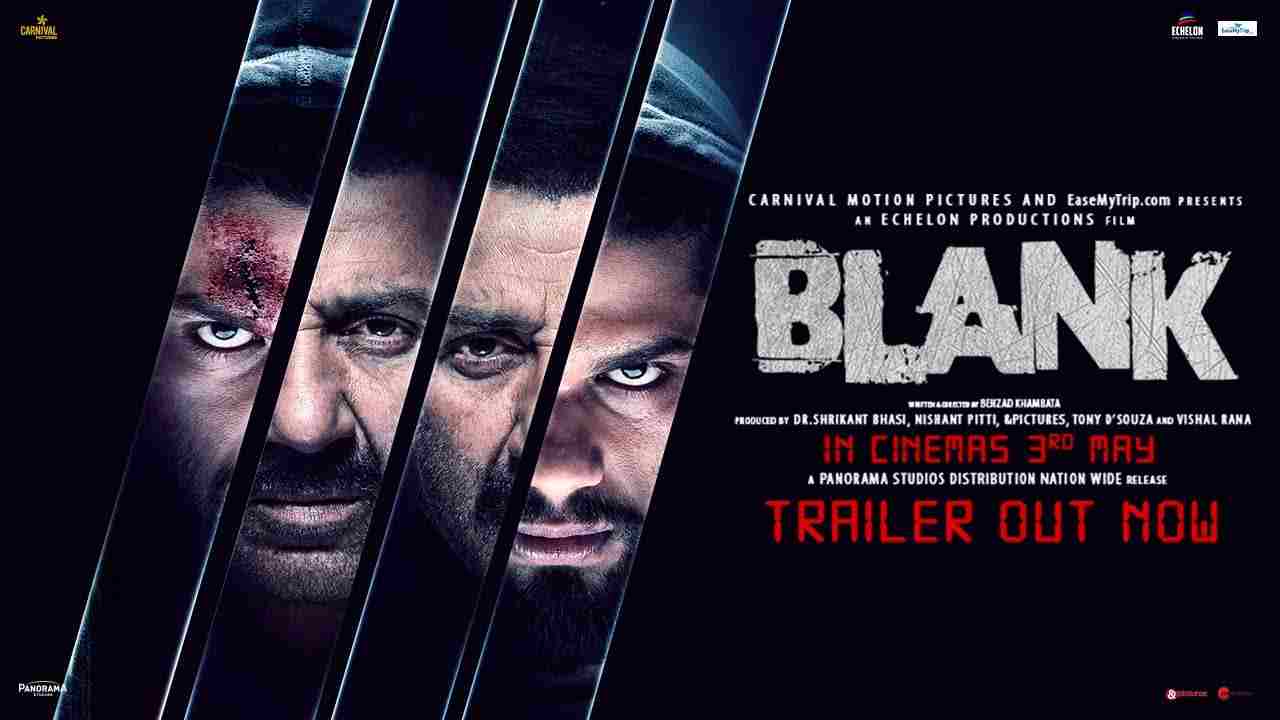 Blank is a 2019 Bollywood drama film directed by Behzad Khambata. The film is about a suicide bomber loses his memory and has a bomb attached to his heart. Now, the police have to prevent this from taking innocent lives. The film features  Below this article, you will find details about Blank Full Movie Download and where to watch Blank Movie Online.

Hanif and his group reach Mumbai

Terrorism is increasing in this era of the world. Where a terrorist organization led by Tahreer Al-Hind orders an attack in Mumbai. Hanif is the main member who with his team comes in Mumbai with his group. Their goal was to blast 24 different places throughout Mumbai. Unfortunately, Hanif on the day of blast meets with an accident by hitting with a car and was injured, so he has been shifted to the hospital.

As the hospital staff was checking upon him, they found out that there is a bomb attached to his body. The staff made sure of informing this information to Anti-Terrorism Squad. SS Dewan was called upon on duty to handle the issue. When the doctors were trying to figure out what is the bomb is been attached to, they found out that the heart is the one that is keeping the bomb running.

After giving the required treatments, Hanif was able to get conscious again. When asked about what was the main goal of him and other questions, Hanif has only one answer that he does not know anything. He has taken up retrograde amnesia because of which there is a loss of memory, but Dewan does not agree with him and thinks that he is lying.

Husna and Rohit, people who work under Dewan capture another terrorist named Farukh. As per orders from the senior of Dewan was to kill Hanif because the information they want can be now perceived from Farukh and there was no need of Hanif, so Dewan with his squad took Hanif to a place to kill him.

The encounter of Hanif

In the meanwhile, Husna figures out blueprints of the bomb, which has been found from Hanif’s house and finds out that the other bombs which were placed in the different locations were connected with Hanif and if he was killed then it will trigger the other bombs too. When the officers were encountering Hanif, a group of terrorists attacked the officers.

Hanif was able to meet up with the group and they all went to a secret basement where he meets Maqsood. Maqsood was the leader who gives orders. He awares Hanif that his parents were been killed. In the meantime, Dewan and his group were able to relocate the location of where they were been halted and tries to kill each of the terrorist presence in the location, but of the luck, Hanif escapes.

It was found out that Hasna was behind the act, which made Hanif escape. Hanif than catches a train and led to a compartment which was full of suicide bombers throws the bomb attached to his heart, leading in the killing of all the members present. Now he tries to call Dewan and reveals that he had no memory loss and was acting to make them kill Maqsood, who was behind the killing of Hanif’s parents.

A lot of money and time is spent to make Blank movie. Also, this is Sunny Deol’s first movie of 2019 and their fan might be looking for Blank Full movie download. Whereas, downloading Blank movie from an illegal medium is a crime. Also, if you say no to piracy, you might help thousands of family working in the Bollywood film industry.

Where to Watch Blank Movie Online?

As of now, any of the websites mentioned below do not have Black Movie for download.

Do Not Go for Blank Movie Download From Illegal Websites

Carnival Motion Pictures who is the Production house for Blank 2019 movie, have all the copyrights. Also, they have the right to decide who can give Blank Full Movie Download. Whereas, the websites which are mentioned below are illegal and allow Blank Full Movie download illegally. Hence, we request not to go for Black movie download from any of the websites mentioned below.

Raghav Sachar, Arko Pravo Mukherjee, and Sonal Pradhaan composed the music used, lyrics were been written by Arko Pravo Mukherjee, Adeip Singh, Kumaar and Sonal Pradhaan, and were published by Zee Music Company. There’s no doubt their talent, but we believe that the movie was average. Most of the songs are patriotic based with very common lyrics. But, the music composed is quite decent.

Both Sunny Deol and Karan Kapadia has done amazing work in this movie. This, in fact, is one of Sunny’s best movies and Karan’s has a successful doubt. On the other hand, Karan Kapadia plays a key role in the movie, and he has played his character, Hanif, quite well. What makes their actions more interesting is the story that evolves around the characters.

Khambata’s heading is rough and can be related to the TV series CID, does not have thriller as expected. Given the motion picture decisions for the end of the week, it was telling that there were more takers for Avengers: Endgame in its second end of the week than for the privately made Hindi movies.

‘Blank’ has a complex narrative but not every piece of the puzzle makes sense. There are too many loopholes in the writing and character development. But the way the story is narrated, the movie makes a good presence on screen. Overall, the movie is a one-time watch movie. On the other hand, if you are a Sunny Deol fan, then you might see something new and interesting in his acting.